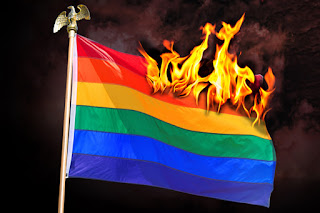 A jury on Friday convicted Kathryn Knott of three misdemeanor charges in the September 2014 assault on a gay couple Philadelphia’s Center City neighborhood.
Knott, whose anti-gay tweets were allowed as evidence in the trial, was found not guilty on the more serious charge of aggravated assault by the jury which deliberated for two days.
Knott, whose father is Chalfont police Chief Karl Knott, was found guilty of simple assault and conspiracy.
Throughout the trial, Knott maintained that she was innocent and that she tried to intervene to stop the attack on the couple.
One victim spent five days in the hospital after sustaining facial injuries including an orbital fracture and required to have his broken jaw was wired shut for several weeks.
Knott was one of the three Bucks County defendants charged in the assault on the couple but was the only one to have gone through a trial. Her two alleged accomplices Philip Williams, 25 and Kevin Harrigan, 26, accepted a plea deal and will not serve any time behind bars.
Williams has been placed on probation and been banned from Center City, where the attack took place, for five years while Harrigan’s probation and ban will last three years. Both must also perform 200 hours of community service at an LGBT facility.
Following her arrest, Knott gained notoriety after it was discovered that she had posted photos of patient X-rays on Twitter that she had access to through her job at the Lansdale Hospital where she worked as an emergency room technician before she was fired.
Her tweets added to her notoriety including one Knott posted after she saw two men kissing in a bar. She wrote: ‘#gay #ew’ and ‘ ‘jazz flute is for little fairy boys’ among others.
Chief of the District Attorney’s Central Division Michael Barry had told Judge Roxanne Covington during a pretrial hearing that Knott had posted ‘a number of tweets which clearly indicate a general dislike to a disgust of gays and lesbians and people of other backgrounds.’
Juror Aristeo Duenas tells Philly.com of the tweets: ‘We were pretty disgusted. It was pretty embarrassing to watch her testify. She was trying to explain away these tweets. … She would have become a better character to me if she would have been like, “You know what, I messed up. I said those things. It was stupid.”‘
Duenas said that in the end, he and some of the other jurors could not convict on the more serious aggravated assault charge.
‘If the decisions went the way that I wanted them to go, she would have been guilty on everything, but when you read the actual law,’ he says.
Knott will be sentenced on 8 February. She may face some jail time or get probation.
Reporter Bobby Allyn also reported that the jury foreman said today, “We just want Andrew and Zach to know that we love them. We love them.” Andrew and Zach are Andrew Haught and Zachary Hesse, the gay couple attacked by Knott and her cohorts.

Despite being filmed attacking the gay couple and all independent witnesses collaborating the couples account, all three of these bigots have quite literally gotten away from any form of real justice.
Not one of these mongrels will serve time for what they did, community service is a fucking joke!
Yet another example of why there needs be hate crime laws in this white Christian privileged country.
As for that jury foreman, no, you don't love Zach and Andrew, or this woman would now be behind bars where she belongs.
Posted by Ulf Raynor at 3:58 PM

Being Gay or Black in America is a real bitch - and if you happen to be both--well you can imagine--but it's better here than in many other countries so you have to take the bitter with the sweet. What's a damn shame is that too many people don't treat other people the way they wish to be treated. Consideration for others and common sense is a very rare commodity. More to the point isn't Donald Trump lucky he was not born a Muslim or Hispanic and his Daddy was a rich real estate developer. Isn't Donald Trump lucky he does not have a molecule of empathy and his billions allow him the luxury of always being selfish, self centered and morally unattractive and pass it off as just not being politically correct. As for Katherine Knotts--another case of the system failing the disenfranchised and the punishment not fitting the crime. Some judge or the district attorney needs to wake up and right this wrong. The men should sue them.

anyone who has served on a jury will know that you do not decide what in your opinion is `right` and what's `wrong`. You decide certain very precisely described questions as put to you by the judge. They are questions of law, as they apply to the case. What's more you may only take into account the evidence as submitted to you in the courtroom. Nothing more, and nothing less. You are not to be swayed by hullaballoo in the media, and you are barred from researching your case online. More than that, you have to be convinced beyond all reasonable doubt that the accused is guilty of the charge. If you think they could have done it, or might have done it, or even `probably` did it, that is not good enough

I just offer the above as possibly an explanation of the decision on the aggravated assault charge - which may have been non-unanimous anyway, I don't know