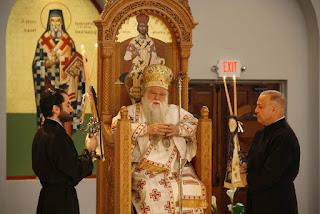 A Greek bishop has reacted to the parliament taking the first steps to legalizing same-sex unions rather badly.
Orthodox preacher Ambrosios of Kalavryta has called on his faithful to ‘spit’ on gay people as they are ‘freaks of nature’.
He said: Spit on them! Blacken them! Vote against them! They are not human! They are freaks of nature! Mentally and spiritually sick! They are mentally insane!’
He added: ‘Wherever you see them, spit on them! Don’t leave them in peace! They are dangerous!’
The bishop’s horrific blog post follows the parliamentary committee beginning to discuss a bill two years after Greece was fined by the European Court of Human Rights for failing to allow same-sex couples to enter into domestic partnerships.
Prime Minister Alexis Tsipras has hoped to rectify this as soon as possible, but the strong religious groups and right-wing political groups are trying to stop the bill from becoming law.

Sounds like fun Ambrosios, you spit on us and we throw lit matches at your beard and flowing silk robes.
Sounds like a party to me.