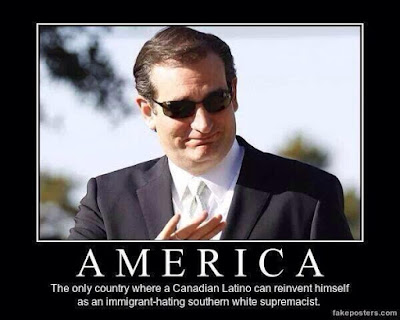 Ted Cruz is notorious for anti-LGBT views, and was one of four Republican Presidential candidates to sign a pledge to amend the Constitution to ban same-sex marriage.
In a campaign conference call between Cruz and religious anti-gay activists exposed this week by Right Wing Watch, the candidate attacks President Obama for letting gay people in the military, and yet again pledges to overturn the marriage ruling.
Asked whether he agreed that gay people are responsible for lowering morale in the military, Cruz said: “You look at the military and one of the things we’ve seen is morale in the military under the Obama administration has plummeted, and it has plummeted because you have a commander-in-chief that doesn’t support our soldiers and sailors and airmen and marines.

“You have a commander-in-chief that treats the military as a cauldron for social experimentation. He’s more interested in promoting homosexuality in the military than he is in defeating our enemy.
“For example, the military is now focused on trying to promote transgendered [sic] soldiers.
“The role of the military is not to be some left-wing social experiment.
“I would stop the shameless politicizing of our military to push a left-wing agenda that is contrary to the values and contrary to who we are as an American people and a nation founded on Judeo-Christian values.”
Pledging yet again to void all gay weddings, he said: “The gay marriage decision is one of the greatest threats to our democracy that we have seen in modern times.
“It is the decision reminiscent of [abortion case] Roe vs Wade of a handful of unelected judges arrogantly and lawlessly decreeing the authority to fundamentally change our country and to tear down the foundations of the country.
“It was five unelected lawyers declaring themselves the rulers of 320 million Americans. The response to that decision is one of the key distinctions in this election. Democrats celebrated that decision but sadly a lot of Republicans did as well… including several who are running for President.
“My response to this decision is that it was illegitimate, it was lawless, it was utterly contrary to the Constitution and that we should fight to defend marriage on every front.
“I’ve introduced a constitutional amendment in the Senate to restore the authority of the state legislatures who think marriage is the union of one man and one woman. I’ve also introduced legislation in the Senate to strip the federal courts of jurisdiction over challenges to marriage.”
The activist posing questions to Cruz in the call is Peter LaBarbera, who was arrested in Canada last year for distributing graphic extremist anti-gay literature.
It’s not the first homophobic extremist Cruz has ties with – in recent weeks he ducked calls to condemn a pastor he shared a stage with, who repeatedly said gay people should be put to death.
Cruz was challenged about the views of Pastor Kevin Swanson prior to attending his rally, but declined to condemn him.

I really don't think I need to point out what is so blatantly wrong with this piece of human filth, the fact he's in second place (right behind Trump) says all anyone ever needs to say about the Republican party.
Posted by Ulf Raynor at 6:15 PM

The man is a complete idiot.