Ted Nugent Is A Pussy 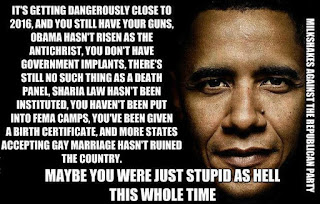 Ted Nugent, who is on the board of the National Rifle Association, is well-known for his conservative views.
He made some characteristically bizarre comments in an interview with conspiracy theorist haven InfoWars.
Nugent said: “People now realize the self-inflicted curse that is Barack Obama and the liberal Democrats who hate freedom, who hate the Constitution… they are intentionally on a runaway freight train to weaken America".
“These liberal Democrats are some strange subhuman freaks, that subhuman freaks vote for.
If you’re not standing up and fighting the beast, you’re bending over and taking it in the a**, and that’s what liberal Democrats want everybody to do.
He added: “America, you’ve got to cleanse this country!”
Nugent has previously said he thinks gay sex is “against nature".
He claimed: “I’m repulsed at the concept of man-on-man sex, I think it’s against nature. I think it’s strange as hell, but if that’s what you are I love ya… I’m not going to judge another’s morals.
“I say live and let live. I have friends that are gay.”

So Ted, when you say:
“People now realize the self-inflicted curse that is Barack Obama and the liberal Democrats who hate freedom, who hate the Constitution… they are intentionally on a runaway freight train to weaken America."
You mean the liberal President who derailed the Republicans fiscal banking collapse, ended the mortgage crisis, ended an ever inflating jobless rate, the economic rape of America supporting an egotistical Republican President who thought he could immortalize himself in glorious victory with a war on Iraq, that led to the creation of ISIS and saving us from the near devastation of an economic collapse of Wallstreet?
Then yes, Obama accomplished all of that and much, much more.
It must really gall you white Republicans, that a black man saved this country from certain economic doom and brought us into a new age of potential social enlightenment that would have never been possible by the backward, ignorant rantings of knuckle draggers like your gun totting, fag hating self.
If anyone is truly inferior, it would be those who think their morally bankrupt ideology is what makes America great.
With any luck Ted, you and your ilk are a dying breed, gasping your final breaths, while futilely pouring the last vestiges of your loathsome, hateful energies into that odious cesspool you call Republican Presidential candidates.
Die screaming Ted, so all your so called gay friends can piss on your grave.

`I have friends that are gay`

I think he means `I have imaginary friends that are gay`

Ted use to be a rock musician, so I have no doubt he "knows" gay people, but I can safely say, they aren't his friends.

And if he was a rock musician he probably got high on drugs off and on and probably had gay sex once in a while. He could always deny that by saying he was high. What a douchbag.