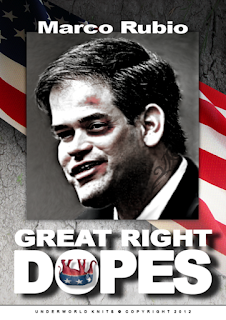 Republican presidential candidate Marco Rubio on Sunday said that he would as president reverse the Supreme Court on marriage equality by appointing new justices.
Rubio, also a Florida senator, said that he disagreed with the high court's June ruling that found gay couples have a constitutional right to marry, but would not pursue a constitutional amendment to reverse the decision.


Doing so “would be conceding that the current constitution is somehow wrong and needs to be fixed,” Rubio said on NBC's Meet the Press. “I don't think the current constitution gives the federal government the power to regulate marriage. That belongs at the state and local level.”
“It's not about discrimination,” he insisted. “It is about the definition of a very specific, traditional, and age-old institution.”
“What is wrong is that the Supreme Court has found this hidden constitutional right that 200 years of jurisprudence had not discovered and basically overturn the will of voters in Florida, where over 60 percent passed a constitutional amendment that defined marriage in the state constitution as the union of one man and one woman.”
“It is the current law. I don't believe any case law is settled law. Any future Supreme Court can change it. And ultimately, I will appoint Supreme Court justices that will interpret the constitution as originally constructed,” Rubio added.
Writing at Think Progress, Judd Legum notes that while it's likely that the next president will appoint multiple justices, traditionally justices respect the rulings of their predecessors.

Which is why you will never be President Mr. Rubio.
The Supreme Court didn't find something that hadn't been there previously, they didn't rule that homosexuals could marry, they ruled the states didn't have a constitutional right to deny them equal treatment under the law.
Of course, you do understand this, your just pandering to your base, and yes Mr. Rubio, it is discrimination no matter how many times you try to deny it.
Posted by Ulf Raynor at 5:18 PM